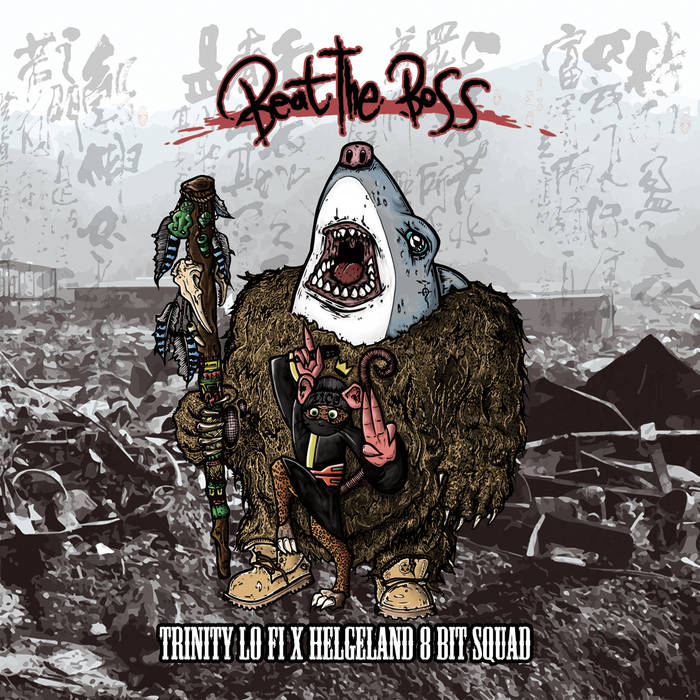 Beat The Boss LP by Newcastle and Norway’s finest new trinity of crime fighting artists who between them are a serious blend of graffiti animators, MC’s, singers, producers, video editors and truth embellishing lyricists with some deep ideas to share about humanity who have created a mini masterpiece of sound in an 8 bit excursion which will blow you to bits as it did the Renegades when they sent it to us. Made up of Jody Bigfoot, Louie Zico and Helgeland 8 Bit Squad. Bigfoot and Zico came together having known each other as childhood friends and bonded following Bigfoot’s return from traveling Japan and Australia for the funeral of his best friend. A unique collective including various guests, a sound was created by combining the idiosyncratic voices of a disparate group with one mind. The track titles speak volumes, Beat the Boss - inspired by Jody’s decision to quit full time work under a dragon of a boss to complete the album, Eyes – Named after the third verse’s rhyme structure, the final verse close friend Lee Halpin recorded before his sudden death on the streets of Newcastle whilst trying to highlight the plight of the homeless, and Pierce – a dark and sublimely poetic piece observing the surface deep attitudes and endeavours of we humans, encouraging ourselves to pierce deeper. As fans of Helgeland 8 Bit Squad’s truly unique style, they decided to form the magic trinity to create this LP influenced by the late Space Ape and the Renegade Commander’s own immaturely baked efforts a few years ago. Firmly handing that baton to the the next generation we present to you a blend of 8 bit hip hop and laid back trip hop with a chill-out vibe, this is one for every Reggae Hop lover to kick back to and prepare for any event no matter how stressful, this LP will unwind you and get your head bobbing with the rhythm of sea waves on a calm night. You will love this, there is no doubt.

Trinity Lo Fi was a groundbreaking 8-bit reggae hip-hop group formed in Newcastle UK. After dissolving as a group it has become a record label, launching with Jody Bigfoot's debut solo project Duszt. A 12 track visual album filmed on location in Japan... ... more

Bandcamp Daily  your guide to the world of Bandcamp

Featuring appearances from Kari Faux, Bluestaeb and and interview with NY-bred artist Wiki